You are here: / Home/News & Features/ A Helluva Handover

The commissioning of the two identical units hopefully marks a new beginning in the process of introducing drivers to their new trucks and trailers say the organisers of the event. 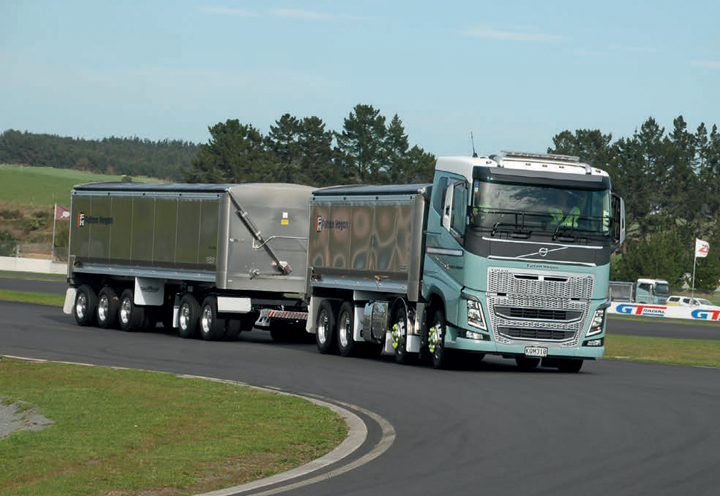 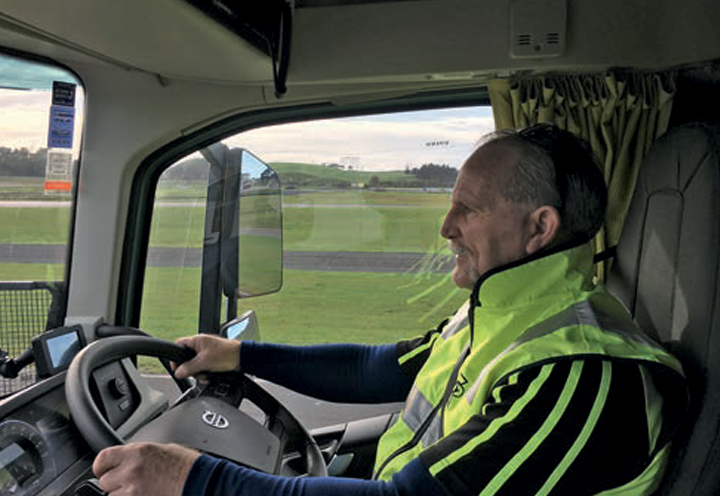 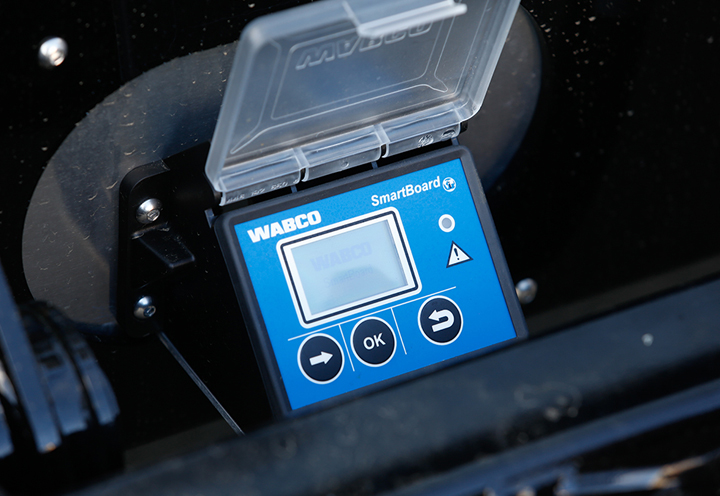 WABCO SmartBoard is the on-trailer interface. The trailer is also equipped with an OptiLink smartphone (Android) interface. 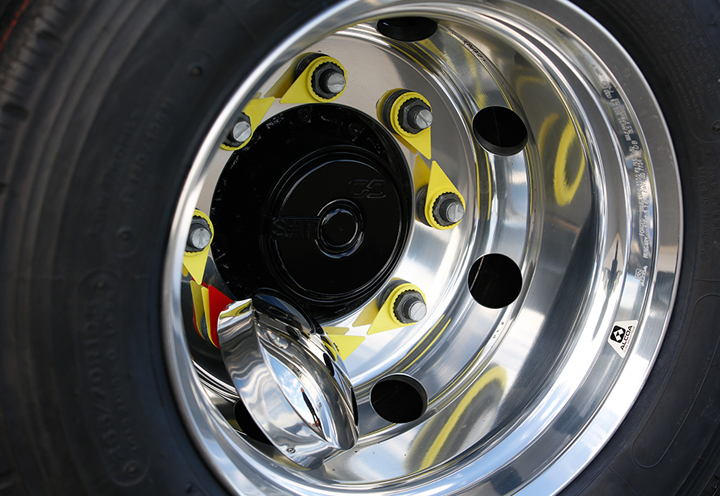 The trailer also features SAF IntraDisc axles and suspension, Alcoa alloy wheels and Edbro tipping hoists on both the truck and trailer. All are supplied by Gough Transpecs. 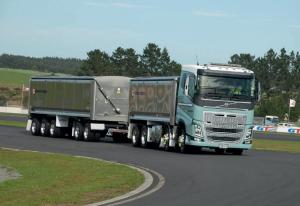 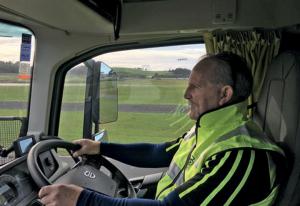 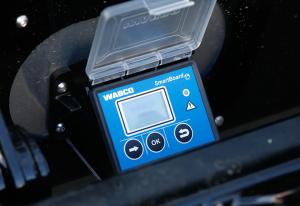 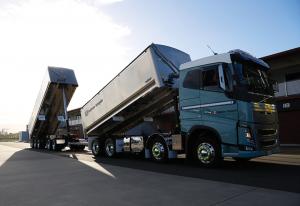 AS TIPPERS GO, THIS IS ONE PRETTY DAMN IMPRESSIVE unit:

A cool 600-horsepower under the floor, an automated manual transmission to take the work out of shifting…and driver-friendly technology to make life behind the wheel a lot easier and safer. A stability control system that warns if you're pushing-on a bit too hard in a corner, ABS braking in combo with WABCO EBS on the trailer, a system that'll stop the unit if people or objects close behind the trailer are detected during reversing, a lock that stops the hoist lifting if the tail door's still closed….another that won't let you tip if the unit's on too much of a side slope.

Alluring as it all sounds, last night longtime driver Ernie Naera decided that it wasn't for him - and told his boss at Fulton Hogan that he'd prefer to stay in the nine-axle DAF CF85 HPMV unit that he's been driving since last year.

Never mind that it's far from new and is well down on horsepower compared to the brand-new FH16 Volvo - 510hp compared to 600. Never mind either that it doesn't have half of the technology that this unit bristles with. And that he has to manually shift its 18-speed Roadranger every day in Auckland's notoriously stop-start traffic.

The boss, he says, asked him to hang fire till today - to still attend this event we're at..…then decide.

And now, here's Ernie climbing down from the cab of "his" Volvo, clearly buzzing from the experience he's just had behind the wheel and declaring: "I did say no last night….just because of the Volvo cab being quite big….

"Now, I can't wait to get into it - do some work in it. Just so smooth. Then it's got the power there too."

What's brought about the change in Ernie is something of a Kiwi milestone in terms of commissioning a new truck - a handover that's the exact opposite of the boss chucking you the keys to a brand-new truck and sending you off on your first job there and then. In at the deep end.

TR Group and lease customer Fulton Hogan Auckland has organised what you might call The Ultimate Handover - devoting half a working day (and a whole lot more in terms of organisation) to giving the drivers of the civil construction giant's two new Volvo FH16s a detailed familiarisation session on how to get the best out of their technology…and their safety features.

And they've hired out part of the Hampton Downs motor racing circuit in the Waikato so the drivers assigned to the new Volvos - Ernie and longtime Fulton Hogan employee Paul Lucich (who's clocked-up 24 years driving trucks for the company), plus the driver who'll likely be their backup, Malcolm Troup - can safely get some practical training as well as the theory.

TR Group MD Andrew Carpenter reckons that the typical transition between a new truck and its user is "not all that great." In fact, he adds: "These two worlds - the creation of the truck and the use of the truck - tend to be joined together by a piece of string or a piece of chewing gum...."

We can, he says, "do a whole lot better" with delivering a new truck - "and we're sort of hoping that today is where that begins."

And he tells the drivers, assembled suppliers and Fulton Hogan people, including Auckland deputy regional manager Damon Norden: "At TR we've got a big intention to lift the game there and it's fantastic that you're all playing a role in that."

Paul Lucich and his truck will run between a quarry at Whangaripo (near Matakana) to Silverdale, while Ernie Naera and his FH will be carting from Winstone's quarry at Hunua, to the Fulton Hogan plant in Penrose.

As Fulton Hogan transport divisional manager Brett Horrobin confirms: "So we're going automatic." The move to AMTs suits Auckland traffic - and the driver shortage. As he adds: "We've got to make it as user-friendly as possible for our new drivers entering the industry."

New to a tipper application is ITP's TailGUARD, which reduces the risks during reversing by detecting people or objects- even if they're small and moving - in the blind spot directly behind the trailer…first sounding an audible alarm and flashing the marker lights, then automatically stopping the vehicle at a preset distance from the object.

Until now, in NZ it's been used primarily for improved safety and reduced damage in backing trailers up to loading docks or in busy supermarket carparks - because, as Hirst says, "in that environment people have little regard" for reversing trucks: "They just see them as a nuisance more than anything else. You can see them driving behind, walking behind….

Now, on HPMV units like these 22.2-metre-long Fulton Hogan combos, TailGUARD seems like an excellent idea for tippers too. The system even ensures "that the reversing speed is sensible," says Hirst. Anything over 10km/h automatically triggers the brakes.

But wait…there's more: These Fulton Hogan' truck and trailer units have side-slope detectors that lock the hydraulic hoists if there's a danger of them tipping over - which Horrobin poinpoints as "the biggest hazard we've got with a truck and trailer tipping unit….particularly if it's got five axles. So we try and do everything we can to minimise the potential."

At Fulton Hogan's request, Transport & General some time ago came up with a system that intervenes and locks the hydraulic hoist on a truck if the tail-door's not been opened.

Then, says T&G director Greg Cornes, "we decided that the trailer was actually the bigger risk - it's a bigger item and there's been several cases where trailers have gone over in recent times. Either from driver error, with not opening the trips, or a mechanical failure."

So now the company has developed a tipping lock for the trailers as well. Easier than it sounds, Cornes explains: "In a truck it's a very simple system to do - it's a mechanical system. But to control the hydraulic system from the trailer - whereas normally all the hydraulics are controlled from the truck - is not so easy."

Finally, in the interests of keeping the driver safely in the cab for many operations, these units have electric, wirelessly-controlled Razortarps.

TR Master Drive's Garry Jones, who's developed today's driver training course, confirms that as new vehicle handovers go, "this is the first one we've done with this level of grandeur."

After their vehicle familiarisation the drivers take turns to get behind the wheel of Ernie Naera's truck and trailer unit - loaded to around 35 tonnes all-up - to be coached by TR Master Drive trainers in exploring the capabilities of the unit's stability control and emergency braking technology.

First it's a matter of provoking the truck's stability control system - by having them drive a little too fast into corners, simulating "a situation where they've nodded off to sleep, or gone into a corner too fast, or been distracted - trying to get their radio on, looking for their water bottle or something like that.

"We'll also simulate travelling along a road and a vehicle has either pulled out of a gateway or stopped in front of them - and we're going to swerve this thing around it. We're going to do that in two ways - one will be with brakes on, one without the brakes."

Jones demonstrates the counter-intuitive first manoeuvre - swerving hard from the left-side of the track, to the right - around some road-cones: "The normal reaction would be to hit the brakes," he says evenly.

"But we want them to accelerate - so that the weight goes to the rear and we still have control of the steering."

As is the case, remarkably, next time around - when Jones brakes as he swerves. It's scary, but we come to a halt having missed the road cones and with the trailer still tucked-in directly behind.

As he says: "What it does is just show that you can do this in an emergency situation. And get away with it - because the technology is there that'll help you. Without ABS you'd get lockup…the dynamic forces are gonna take over and you'll have no control of the vehicle. But ABS and WABCO trailer EBS have worked together to avoid a loss of control."

Finally, there's the emergency braking - from around 60km/h. He hits the brake pedal, the front of the FH dives, the tyres complain a bit…and we stop dead in less than 20m, the truck and trailer in a dead-straight line.

"If we get them to practice that kind of thing in this sort of controlled environment - touch wood it never happens, but if it does happen - it'll still be stored away in the brain there somewhere."

Even for a well-experienced driver like Paul Lucich - who, Horrobin describes as "the benchmark" driver in the company's Auckland operation, the top-scorer in the monitored driver rankings - swerving the unit as directed prompts some swearing: "Shit! Shit! Shit! That's more frightening than I thought!"

A lap later, after swerving AND braking at the same time, he lets out an "oohhh man!" Then, after a moment's reflection: "I'm just impressed that the trailer's stayed put…and it doesn't take over. So all I'm dealing with is the truck."

It's the same reaction at the emergency stop: "**** she stops! My God! And she's straight - it just feels like all I'm dealing with is this thing - the truck. And the trailer's taking care of all that other stuff."

Says Jones: "Yeah it's going to give you the confidence that if something happens in front of you - bang! Stand on the brakes and you know you're going to stop. And if it all turns to shit you can steer.

"All you have to do is make sure your foot goes hard on that brake - and stays there."

For Damon Norden, this handover completes the safety push that Fulton Hogan has long since embarked on with its trucks: "For us, the combination of safety and productivity is always a challenge. So what we've been able to achieve with these trucks is the high productivity AND the safety as well. It's easy to get the productivity off it - but it's not always easy to do it safely.

"Trailer tip-overs are a real problem in our industry. It happens more often than it should. With the safety features in these units it won't be possible. So that means if guys get distracted or there's a mechanical problem, they can't tip 'em over. So that's a great plus for us.

"The reversing protection: With the congestion in Auckland and the tight sites and just that constant need to be aware, this being almost a failsafe is fantastic."

And, he adds: "The training the guys are getting today on how to use all those features is key - and therefore we're able to achieve our productivity and do it safely.

To read the full article - get your copy of Truck & Driver's August edition today! 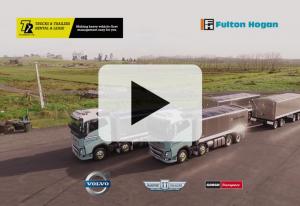 
The commissioning of the two identical units hopefully marks a new beginning in the process of introducing drivers to their new trucks and trailers say the organisers of the event. Gough Transpecs was honoured to play a part …